Out of Chaos, Hope 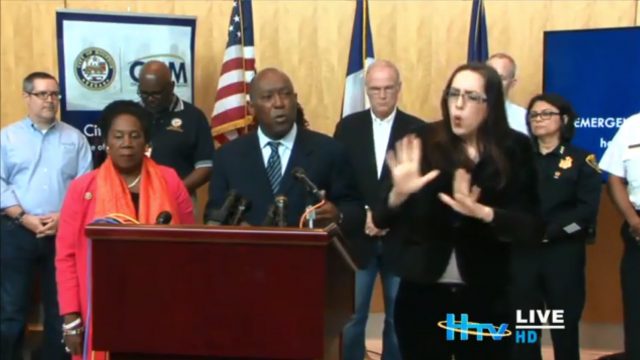 It’s been said that one can judge the quality of a society by the way they treat their children and the elderly. In the midst of the devastation caused by Hurricane Harvey, the strength and the love of the people of Southeast Texas shone brightly, especially as they came to the aid of those who were most vulnerable.

If you have ever been in a country whose language you don’t speak, you know vulnerability. I remember being alone in Japan in a train that stopped suddenly in the Japan Alps. I knew I was the only person on the train who didn’t speak Japanese. I tried to manage my panic until an older woman handed me a candy. Though I didn’t know what emergency instructions might be said, at least there was another human being who knew I was there!

So I loved watching an announcement from the Houston officials, who spoke mostly in English, and some in Spanish-but throughout, whether Spanish or English was spoken, everything was interpreted handily in sign language.

And there were dramatic images of people carrying children and pets (one man carried his son, who in turn had a dog on his lap), and extra care for the elderly and those with disabilities.

College student Austin Seth read on Facebook the call for anyone with a boat to come help rescue people from the floods. He drove an hour from his home in Lake Jackson and allowed a CNN reporter, Ed Lavandera (video), to ride in his boat to get a better sense of the situation in Dickinson. Ed pointed out evidence that people were rescued from their roofs, including several homes where the people clearly chopped through the roof to escape their attics.

About 5 pm Austin and Ed were on their way out when they heard a woman calling to them. While they were on the air, the woman first handed one dog to Ed, who was able to bring the dog into the boat while still giving his update. Then an elderly man, the woman’s father, walked out with a cane. The water was chest high, and the entrance to the boat was higher than that. Austin had jumped into the water and entered the house, because the woman went to get her mother, who had Alzheimer’s.

Ed first tried to pull the father into the boat but clearly that would not work. Austin came up and gently asked, “I can lift you up, if that’s okay?” He said yes and they brought the father into the boat. After bringing in another dog, Ed told the anchorwoman that they should cut away until they checked the condition of the mother. On the web, they did show the mother, who did express concern about her looks, to which Ed answered, “You look great!” The sensitivity shown by the young volunteer and this news reporter preserved not only the lives but the dignity of this family.

Our prayers go to the thousands of people who have lost so much in the wake of the hurricane and floods. Personally, I thought of our sisters and brothers of New Covenant Presbytery, where my friend Lynn Hargrove is part-time Stated Clerk. Their long-time executive Mike Cole has retired, and the position is still vacant, so Lynn posted the following on their website:

Harvey shows no signs of leaving our presbytery yet. Please know that Presbyterian Disaster Assistance plans to be here later this week. Our offices are closed on Monday, and possibly longer. Please email, use our Facebook page, or call cell phones. Our disaster preparedness team will be contacting you. Pastors and clerks have been asked to provide updates. People from across the country are praying for us.

So as those in leadership seek out those in need, let us continue to pray, let us be inspired to help those in our neighborhoods who need help, and let us pledge support, now and on-going, to these Harvey survivors, as they rebuild their lives.

Your partner in prayer and in action,