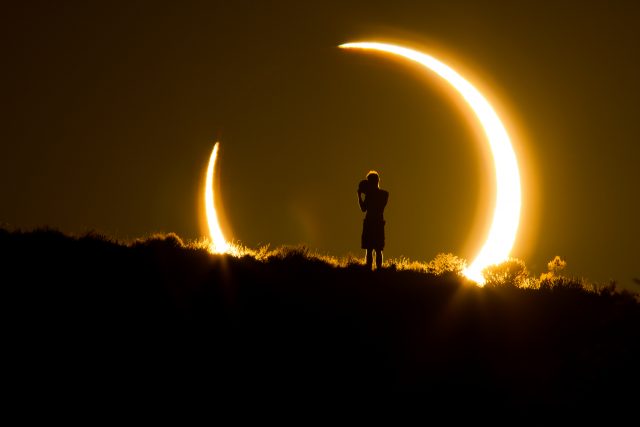 I know this is proof texting (digging around the Bible to find a quote to fit your purposes, even if it doesn’t reflect the meaning of the Scripture), but I couldn’t resist thinking about the attention put to this morning’s solar eclipse. Certainly such an event could bring great fear among those who do not understand the systematic design of the universe that incorporates it. This fear can only be exacerbated by yet another collision of a US Navy ship in the ocean around Asia which just occurred.

What we often forget is that for something new and significant to happen, there needs to be a discontinuous break-that is, change, such that your old maps and logic don’t work anymore. That can be scary for many, and a loss for those who loved the “good old days”-or at least the memory of them. I have noticed this when a church makes a significant change, even a good one, as long-time members miss aspects of the old way they did church.

The Bible is filled with moments when God intervenes in human history, which results in a reversal of existing power structures. I’m sure you have noticed how often messengers from heaven start their announcement to us mortals with “Do not fear!” This happens, of course, in the stories of Christ’s birth as well as Christ’s resurrection-both miraculous moments of total upheaval. They are moments of unprecedented change, but since we look back on it, it is change that we celebrate.

In our lives, many of us have seen great change that may be good but also stunning. Consider the shock of the new when people immigrate to the United States. The radically different culture of the United States can upend the traditional values of the immigrant family. Also, those with professions in their home country may not enjoy the same status in the US, and parental authority may be challenged when children are asked to take on adult responsibilities because of their English language abilities.

Recently there seems to be a simmering war between those who most fear the changes in our society. But I can sense some of the fear they are feeling. When talking about diversity, I often think how hard it can be to welcome in people of different cultures-not just for them to assimilate to our ways, but to be open to the change a new culture might introduce. I think about the revulsion many Asians had to drinking the milk of another mammal, which one person likened to drinking blood. Yet when the US occupied Japan after World War II, they introduced milk, which resulted in an increase in height and bone health-and a learning that many Asians are lactose-intolerant.

By contrast, what if someone who drank only milk their whole lives was offered a glass of lemonade? That person might think they were being poisoned! And so those who were raised thinking that America at its best is filled with a certain demographic would become concerned when they realize that the nation’s population is much changed. And the moment when the US will no longer be a white-majority nation is coming soon, and has already arrived in, for instance, San Gabriel Valley. Not only that, the non-white populace is gaining in status, most vividly demonstrated by the first African-American President. Add to this the rapid acceptance of people of different sexual orientations, even to the point of military commanders speaking out in favor of transgendered people in our armed forces. The changes really have been breathtaking-and for some, the changes have been shocking.

But again, change can be scary but also good. How do we manage our fear when confronted with a new world, even if it turns out to be a wonderful new birth? Recently our national church has responded to the violence at Charlottesville with several resources, which I share here:

These reflect a few of the ways we Christians can face a changed future of any kind. We can learn from our leaders and resources developed by sisters and brothers in the faith. We can step forward in faith, knowing that our encounters with God are often realized when we step outside our comfort zones. And, of course, we can always pray for comfort and guidance, we can read Scripture to learn more of God’s will for the world, and we can share our concerns and our wisdom with our community of faith.

In these unusual times, when so much change offers both promise and concern, may we continue to be strengthened by the enduring love of Jesus Christ, and may we share that love with this worrying world.