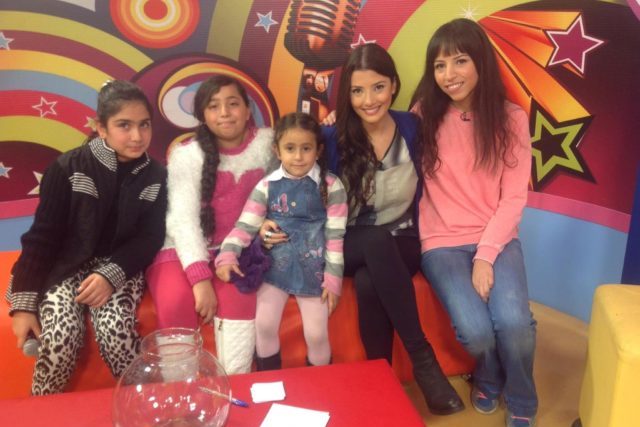 I am writing this column from Chicago O’Hare Airport, on the way back from several days in Louisville, so let’s give thanks to the miracle of technology that keeps us connected wherever we are.

I am half-joking, but actually I have wanted to share something that’s happening thanks to technology that I find really wondrous. One of the worship leaders at Mideast Evangelical Church, Ray Henain, is Associate Director of Church Connections for Sat-7, a satellite television network founded and led by Dr. Terence Ascott. It is the oldest and largest Christian satellite organization operating in the Middle East and North Africa; the network covers this region as well as most of Europe.

They have been beaming Christian broadcasting since 1995, sometimes featuring our own pastors. But what caught my attention is a new venture. They have had a Sat-7 KIDS series since 2007, but recently they have addressed the need for basic education. In an effort reminiscent of the Presbyterian traditional commitment to education for all, they have developed a basic education curriculum including mathematics and language skills in both Arabic and English. The approach is not overtly religious but guided by Christian principles, including empowering girls as well as boys with education. And since it’s being carried on a free network, anyone can access the programming.

This means that even families who have been displaced by war and persecution can have access to high-quality, inclusive education wherever they can get a satellite feed. When they first launched this programming, there were reports of 400 kids crowding in front of a television at a refugee camp in northern Iraq, teaching girls and boys of many different ethnic and religious backgrounds together.

I share some information that Ray Heinan sent me to see some of Sat-7’s work:

SAT-7 overview, by Dr. Terence Ascott (SAT-7 CEO and founder)
Myriam story blesses and pray for isis. this story has gone viral through social media made over a million share within 48 hours.
Short introduction to MYSCHOOL
Meet our audience, visiting refugees’ camp after one year of having MYSCHOOL on SAT-7 KIDS channel
SAT-7 ACADEMY website.

I was so heartened by the forward-thinking and generous spirit of this network, which offers a future of hope to families even in the most dire circumstances. Since we share offices with Mideast Evangelical Church now, I am learning even more of the many proactive and creative ways they participate in mission, here in Southern California, through international networks with educational and Christian inspirational programming, and with mission trips where they can share the good news of salvation and healing in Jesus Christ to people who have been isolated from the gospel.

You know that a couple of years ago, MEC sent a team to northern Iraq, and had to cancel a follow-up trip. In the meantime, Rev. Maher Makar was asked to go to Tunisia in North Africa. Tunisia does not have much of a Protestant Christian presence yet, so the Christian communities are small, underdeveloped, and lacking in leadership. It was sad for Maher to go there and wonder what will happen after he left. He is discerning what the next steps might be for evangelizing in this small nation, which turned out to be fairly tolerant and supportive of their work. (The government actually sent peace officers to ensure the mission team was safe as they met and baptized new Christians.)

Please pray for the Christians in the Middle East and North Africa, and for guidance and support for MEC as they seek to discern God’s will for their gifts of Christian love and charity that crosses bounds of nation, religion, and history.

I invite you to contact Ray Heinan at Sat-7 or Maher Makar at MEC if you are interested in learning more, or having them speak at your church. Their contact information is:

And please put Oct. 7-8 on your calendar for several special events (scroll down for more info), including a welcoming worship service for MEC in their new home at 9723 Garibaldi Avenue in Temple City. They are asking that presbytery and ecumenical partners come to bless their ministry in this new home. The service begins at their regular worship time, Sunday October 8 at 1:30 p.m. If you want to let them know you’re coming, you can email them at mecpasadena@gmail.com

As my time on the board of the Presbyterian Mission Agency winds down, I look forward to having more time to visit with more of our churches and hear of the many ways you are serving our Savior in your neighborhoods. Praise God for you, and I hope you too feel the desire to praise God for San Gabriel Presbytery!

← Out of Chaos, Hope God's Appearance to Us →