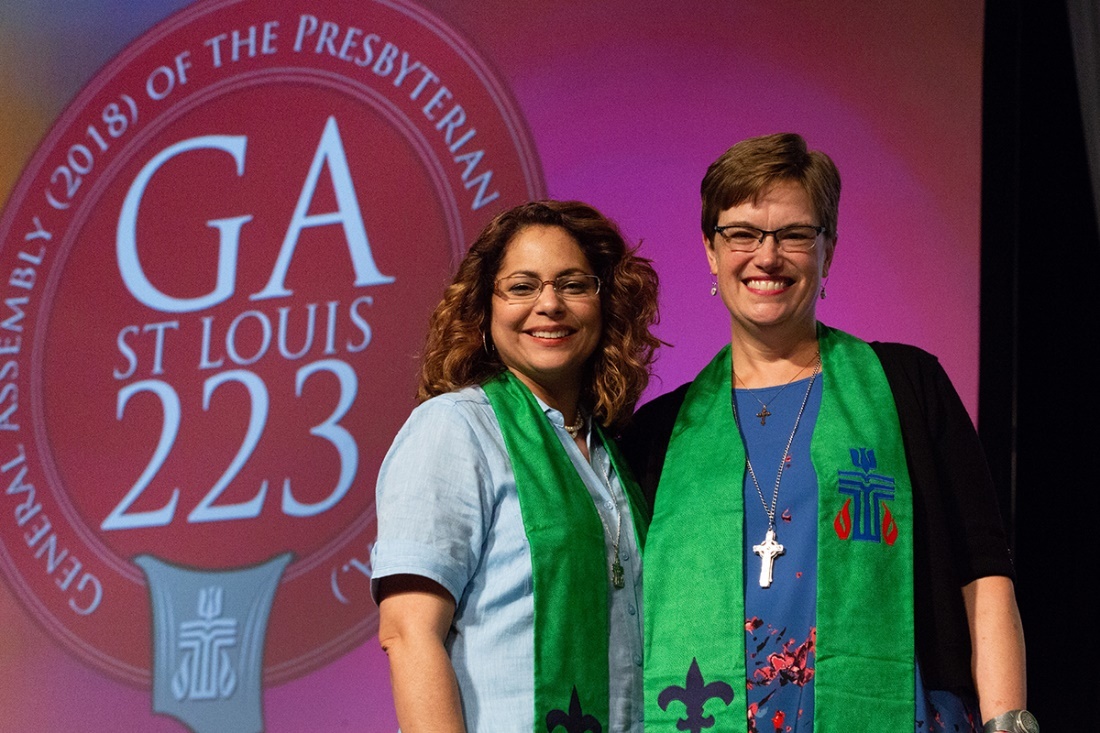 I am writing from the 223rd General Assembly in St. Louis, Missouri.  Here’s a photo of our representatives, in their first plenary session:  Young Adult Advisory Delegate Sophia Alecci (who has become one of the leaders among the YAADs), Ruling Elder Commissioner Deborah Owens, and Teaching Elder Commissioner Bear Ride. 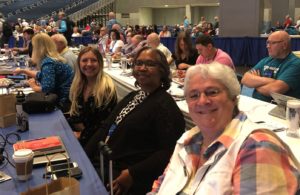 So far the biggest news has been the election of co-moderators Elder Vilmarie Cintrón-Olivieri and Rev. Cindy Kohlmann. 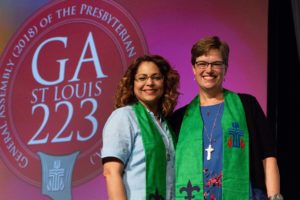 My personal claim to fame is that Cindy is a good friend of mine, so I got to spend election night backstage.  Here’s a not-great photo that gives you a glimpse of the rites of leadership passage in the PC(USA).  This photo includes all six candidates, who ran in three teams:  from left to right, Cindy and Vilmarie, co-moderator candidates Revs. Eliana Maxim and Bertram Johnson, and vice moderator candidate Rev. Ken Hockenberry, who ran with moderator candidate Elder Chantal Atnip.  Guiding them with prayer and experience is Elder Heath Rada, moderator of the 221st General Assembly (co-moderators of GA222, Tawnya Denise Anderson and Jan Edmiston, were on stage). 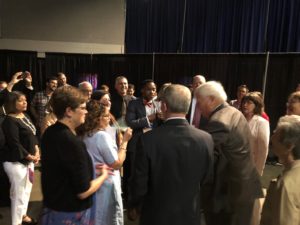 The election is always met with acclamation, and sometimes some controversy—in this case, the YAADs’ disappointment as the commissioners voted differently than the YAADs.  But this election seems to have a historic element.  Though it hasn’t been published yet, it appears that Vilmarie, a native of Puerto Rico, is the first Latinx GA moderator.

No, you did not just catch me in a typo.  The term “Latinx” is a new gender-neutral term for a Latin-American person.  Off-hand, I can remember the evolution of the term from Latin-American, to Latin (or Hispanic), to Latino, to Latino/a or Latin@, to Latinx—or Latine.  The term “Latinx” seems to come from writers in Mexico and academics in the United States who do not restrict gender identity as binary.  So the term can simply mean everyone.  But some people do not identify as male OR female; they are either “gender fluid” or “gender expansive.”  The language is itself fluid, as it attempts to describe this fast-moving issue of gender identity—and yes, honestly I am confused about this new language also.  But in my confusion, I have been advised by our younger generation to still listen to their perspective with respect even if I don’t understand what they are saying.

Now Vilmarie is decidedly Latina, a woman ruling elder married to Rev. José Manuel Capella-Pratts, pastor of First Spanish Presbyterian Church in Miami, Florida.  Cindy used the term “Latinx” to emphasize that Vilmarie is the first person of her community, male or female, to be elected Moderator of the PC(USA).  Cindy had to repeat this to me, because I couldn’t believe it was true, but I just went over the list of all GA moderators since John Witherspoon in 1789, and I didn’t see anyone I knew to be Latino—oops, I mean Latinx.

Why am I attempting to explain this?  Because the topic has come up recently, especially with our younger generation.  But in some ways, it’s just a new casting of old challenges to the ways Western society tends to force everything into two adversarial camps—so you are in or out, right or wrong, with us or against us.  The reality is, of course, that there are infinite varieties of people and perspectives, and it reduces our understanding to enforce these false dichotomies.

Ironically, the big “a-ha!” moment for me came because I have become increasingly concerned that the conservatives in the PC(USA) are either distrusted or ignored by our church leaders.  Rev. David Won, who helped with Korean Good Shepherd, and a friend are board members of the Fellowship Community, and I have heard that this group has lost some energy.  At the same time, many in the PC(USA) confuse the members of the Fellowship Community with those who have left the PC(USA), especially for ECO, and so they look with suspicion at the Fellowship Community members as if they are going to seek dismissal.  On the contrary, the Fellowship Community members have made a commitment to stay PC(USA), not to debate with the church but for reasons that include shared mission, heritage, or a sense of God’s calling.  By staying PC(USA), they have faced pressure and criticism from those who did leave for ECO.  Attending a Fellowship GA debriefing Sunday night, I heard the leaders describe the group as I have understood it—a gathering of what is now a conservative minority in the PC(USA), where they do not have to feel alone.

So what does non-binary gender identity have to do with the Fellowship Community?  Not what you think—though it’s still probably an area of disagreement, there was no mention of sexuality in the debrief, and the Fellowship Community members do not seem to have any desire to revive that argument.  No, my “a-ha” moment came when I was expressing a hope that when the PC(USA) leaders brag about how inclusive we are, they value theological diversity as well.  As someone who was raised in a classically liberal Presbyterian church, I have greatly benefited from the faith of evangelical Christians, especially in the areas of Bible study, clear theological beliefs, and appreciating our personal relationships with Jesus Christ.  The problem has been when we fail to learn from each other, but instead attempt to force the other to come to our side of any particular debate.  How can we continue to have lively, challenging theological discussion without falling into divisiveness?  A colleague suggested that we learn to appreciate “non-binary theological diversity”—because, in theology as well as in other parts of life, we need not reduce our understanding to conservative or liberal, disciple or heretic, relevant or backwards.

May we learn to accept the will of God even when the answers given to us are not binary, predictable, or even comfortable.  May our confidence in God’s grace infuse all our deliberations, at all levels of the church, that we may be open to whatever God has in store for us.  And may we take the time to listen with respect to each other—be they conservative, liberal, young, or older—that we may better taste the complex and diverse mix of lives and faithfulness that gives us an even more complete glimpse of our very big God.

I ask your continued prayers, not only for the commissioners and advisory delegates of this GA but also anyone who feels disrespected or not heard by those with authority—and, I pray that we all keep our ears and minds and hearts open, for that is how we will grow in understanding and compassion.

May you feel the comfort and challenge of Jesus this week,