When We Don’t Agree 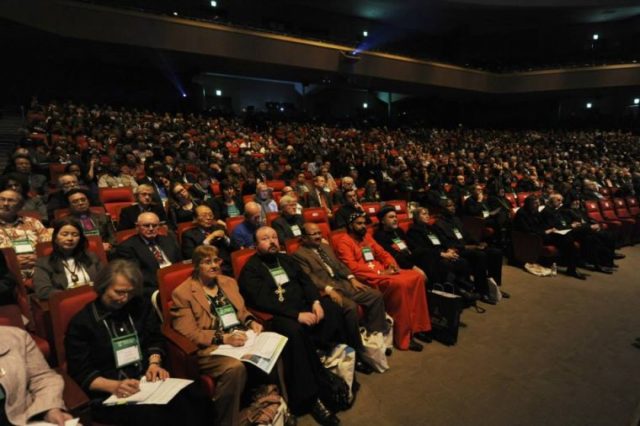 When I was growing up, I always understood ecumenism, even interfaith cooperation and dialogue, to be an integral part of the Presbyterian tradition. I think there have been certain times and places where this was challenged, but this commitment does live on. At the very least, many of our members work with other people of faith for the sake of compassion, justice, and peace.

It’s a little more challenging to study and dialogue about each other’s beliefs. As I prepare for the World Council of Churches conference next week, I found the list of workshops fascinating, reflecting membership that includes the charismatic tradition as well as other, more staid belief systems such as ours. Interestingly, the WCC does not include the Roman Catholic Church, though they do include Reformed, Methodist, Baptist, Pentecostal, Orthodox, Coptic, and Mennonite among their 348 member churches. (San Gabriel Presbytery trivia: the WCC’s second General Secretary was Eugene Carson Blake, former pastor of Pasadena Presbyterian Church.)

The PC(USA) has our own formal dialogue with the Roman Catholic Church; you may not know that one outcome of this dialogue is a mutual recognition of baptism between the two churches. There has not been the same level of mutuality on communion, but the dialogue continues. Locally, a priest in La Puente is leading a Lenten series on other church traditions, and he contacted me because he wanted to speak of the Presbyterian view of communion-inspired by Buzz Aldrin’s story of the communion he had on the moon. I didn’t know and had to look it up. Elder Aldrin wrote about it in Guideposts; I had to chuckle at the mention that they got approval from the Stated Clerk to make sure it was okay.

The corollary to these efforts to unite or connect across traditions is the continuing question about whether to leave the Presbyterian Church. It is difficult for me to know when it is necessary to break a relationship that some consider to be God’s will. But, like any other covenant, attributing something to God’s will does not mean we take each other for granted. Yet, also like any other covenant, one hopes that the roots of the relationship are deeper than simple agreement on various topics. And regardless of relationship, our witness is how we treat others even in disagreement.

I was reminded of this when I happened upon the moment in the 2008 presidential election when a woman told presidential candidate John McCain that Barack Obama could not be trusted because he was “an Arab.” McCain immediately shook his head and said, “No ma’am. He’s a decent family man, a citizen that I just happen to have disagreements with on fundamental issues, and that’s what this campaign is all about.”

It reminds me of the former pastor of Bel Air Presbyterian Church. This evangelical church was known to be opposed to ordination or marriage for gays and lesbians, yet they probably had more gays and lesbians in their membership than any other church in their presbytery. The pastor, Mark Brewer, even had been asked to officiate at a gay marriage, which he declined. He said, “the gay members of the church know that I love them, but we happen to disagree about this.”

Too often, disagreements in the church are expressed as a win-lose, right vs. wrong, heaven or hell contest. What I appreciated about Rev. Brewer’s approach was that he led with love. He did not insist that the gay members needed to change in order for their relationship to continue, and he did not claim God to be on his side of the disagreement.

This does not mean that we can never change relationships. One might consider that the ability to voluntarily form new churches and denominations has contributed to the continued vitality of the Christian faith in the United States. But whether we remain in relationship and disagreement, or we end old relationships, my hope is that the dialogue be guided by mutual respect, even love, and the unshakable knowledge that all who look to Christ with faith and gratitude are united beyond our differences.

As we continue in the season of Lent, and consider our own need for God’s mercy, may we approach each other with an appreciation that we are all sinners, yet also beloved children of God.