The Opposite of Reparations

“Truly I tell you, this poor widow has put in more than all those who are contributing to the treasury. For all of them have contributed out of their abundance; but she out of her poverty has put in everything she had, all she had to live on.”

We are entering into summer, and at least for me, I enter with a complex of emotions. I am getting just a glimmer of hope that we might be free to experience life more fully and openly this summer, but I have not yet been able to “flip the switch” from cautious isolation to confident exploration. My sense is that our churches have also been experiencing this change in different ways, and unlike the last 15 months of restrictions, when everyone had to comply to set rules, our growing freedom means that every church session needs to decide what works best for their congregation. So, for instance, some churches are worshiping indoors now, some are worshiping outdoors, some are thinking about mid- to late July for a transition, and many are doing hybrid worship, so that our church members can worship together, whether or not they are able to come to the church campus. Your session has the freedom and the responsibility to determine the most faithful way to be church in these changing circumstances.

We have a Presbytery meeting coming on June 19. Because this meeting was set to be online, we are opting to turn our annual Day of Service into a Day of Empowerment and Engagement. I think of it as a miniature teach-in. The meeting will be a morning of business, an update on County guidelines on COVID-19, worship and fellowship, and some exciting looks forward in our immigrant accompaniment ministry and opportunities to deepen our intercultural relationships and anti-racism initiatives. It should be a great morning. You can register now—and you don’t have to be a voting commissioner to attend. The meeting starts at 9:00 am.

Of many different ways we can be a more anti-racist presbytery, one topic that has been compelling to several Presbytery leaders is the question of reparations. This is an extremely complex topic, and we have thought about focusing on specific situations to explore the different elements involved.

One situation that might be studied is the Tulsa massacre from 100 years ago. The Tulsa massacre is one of 25 massacres of African Americans that have been perpetrated since the end of the Civil War —a part of American history that is rarely taught in school.

The Tulsa massacre offers a glimpse into the complicated history of race in the United States. I do not have room in this column to explore all of it, but part of the history includes the trials experienced by the Native Americans who first encountered European immigrants (undocumented, to be sure) to what is now the United States. Because they attempted to assimilate to the practices of the settlers, they were called the “Five Civilized Tribes”: the Cherokee, Chickasaw, Choctaw, Creek (Muscogee), and Seminole nations. They adopted European ways, including entering into legal contracts and sometimes running their own plantations with African slave labor. But as the expansion of European- owned plantations grew, these contracts were reversed, leading to the forced removal of these nations to the Indian Territories, which is now Oklahoma. From 1831 to 1847, it is estimated that about 58,000 Indigenous persons were removed, and 10,000 died en route. There were approximately 4,000 enslaved Africans who were also brought to Oklahoma. By the way, there were Presbyterian missionaries who worked with these peoples, who also came to Oklahoma.

The Five Tribes generally sided with the Confederacy in the Civil War, so after the war there were negotiations that led to emancipation of the slaves. The freed slaves (freedmen) became members of the tribes with equal rights, which resulted in the freedmen becoming landowners, contributing to the economic strength of the African-Americans in Tulsa, before the 1921 massacre.

As I was exploring this history, I randomly chose to look into the history of the Choctaw nation, who happened to be the first to leave. I stumbled onto a report that in 1867, just 16 years after they were dislocated and suffered massive death and starvation along the way, the Choctaw took up a collection and sent $170 (over $5,000 in today’s dollars) to Ireland, to help the people starving from the potato famine. The money donated by the Choctaws was distributed in Ireland by members of the Quaker community. Thus began a relationship between the Choctaw and Irish peoples that continues today. 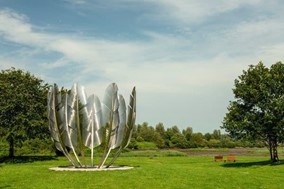 To mark the 150th anniversary, eight Irish people retraced the Trail of Tears, and the Kindred Spirits memorial by sculptor Alex Pentek was unveiled in Midleton, County of Cork. In 2018, Ireland announced a new scholarship program to allow Choctaw students to travel to and study in Ireland. And since the spring of 2020, Irish people have raised over $1.8 million in response to a GoFundMe appeal from the Navajo and Hopi nations who were hit particularly hard by the COVID-19 pandemic.  (If you follow the link to the

GoFundMe page, you’ll see they are still accepting donations—and you can read the heartfelt comments from Irish donors who continue to give.) Gary Batton, chief of the Choctaw Nation of Oklahoma, wrote that the tribe was “gratified — and perhaps not at all surprised — to learn of the assistance our special friends, the Irish, are giving to the Navajo and Hopi Nations… We have become kindred spirits with the Irish in the years since the Irish potato famine. We hope the Irish, Navajo and Hopi peoples develop lasting friendships, as we have.”

There is much hidden in history for which much has to be confessed, and which call for reparations. But there is also much that can be raised up and honored. We weep as the Indigenous peoples of this land have been almost erased, yet we see how powerful it is when those who have suffered can show empathy for others—and how resilient is their act of generosity. May we account for and reconcile for past sins, and learn from the grace and generosity and gratitude of those who have much to teach us.

May there be a time for all of us to recount long relationships between peoples that have nothing in common except for our common humanity.

← Friends for Life Delayed, Not Canceled →