In that region there were shepherds living in the fields, keeping watch over their flock by night.  Then an angel of the Lord stood before them, and the glory of the Lord shone around them, and they were terrified.

Tomorrow is Christmas Eve, when we keep watch for the Bethlehem birth of our Savior, Jesus Christ.  Do you relate to any particular part of the story?  Some women connect with Mary, as they remember the wonder and excitement and nervousness that comes with the birth of a baby.  Some politically-minded people think about the intrigue in the palace of King Herod, as he receives news that a new king is rising, perhaps threatening his power.  Some relate to the wise men, attracted by a star to seek the new king in a foreign land.  Recently I asked this question of the partners sharing our Presbytery Center in Temple City, and one of the Mideast Evangelical Church members was humble enough to liken himself to the hay in Jesus’ manger, his only hope was that he could provide some comfort to the newborn baby.

This year, I have been thinking the most about the shepherds.  I think it’s because the shepherds were out in the dark night, possibly cold and lonely—the last folk who you’d think God’s angel would approach to announce the birth of the new king of Israel.  Shepherds were hardly well-placed and important, but rather poor, unskilled, and illiterate.  I like that at first, in the text above, there was just one angel, and the glory of the Lord shone around them—so the glory didn’t shine around the angel, but around the shepherds.  But rather than revel in that, this terrified the shepherds.  How often do we experience God’s glory in a way that is so extraordinary, it terrifies us!

During this Advent season, my mind is occupied by two people.  The first is Bertrand, the young Cameroonian man Steve Wiebe and I met at Adelanto Detention Center last month.  He continues to be hopeful and positive, participating in a prayer group of fellow asylum-seekers awaiting the decision of whether he can stay in this country that he traveled for six months to reach.  As our Immigrant Accompaniment Organizer, Kristi Van Nostran, pointed out, many detention centers are intentionally placed in remote locations, away from population centers, just as the shepherds were living out in the fields, likely some distance from towns like Bethlehem.

The other person on my mind is, of course, Jake Kim.  Jake completed his interim term with Northminster a year ago, and continued as Associate for Ministry Development for San Gabriel Presbytery, inspiring churches with his passion for ministry and creative energy.  It was only two months ago when he left to be installed as senior pastor of Church of the Valley in Apple Valley.  It seemed like a wonderful blessing—a good-sized, energetic congregation in a community that was quieter than metropolitan Los Angeles, where he could buy a house.  But a little over a week ago he suffered an aortic aneurysm, and has been on life support since then.  I haven’t heard news for a few days, but we continue to pray for Jake and especially his wife Yuni and two young boys Ari and Avi,

I think many of us know something about sitting in a hospital room, as patient or visitor, during the holidays—or worse, having to say good-bye to a loved one when it seems the whole world is partying.  But just as we remember that our Lord came to us in a little baby born of a poor unwed mother—just as the Lord came to us in a barn, temporarily homeless and displaced by imperial edict—just as the Lord came to us as a young child, whose family was forced to seek asylum in Egypt—we are also reminded that the Lord’s coming was announced not only to royalty, but to all the world in a shining star, and God sent an angel to announce the good news of Christ’s birth personally to poor shepherds living out in the cold, outside the city.  And though sometimes we feel outside polite society, far from the holiday festivities, let us always remember that God never forgets us, and will even go to great lengths to reach out to us. 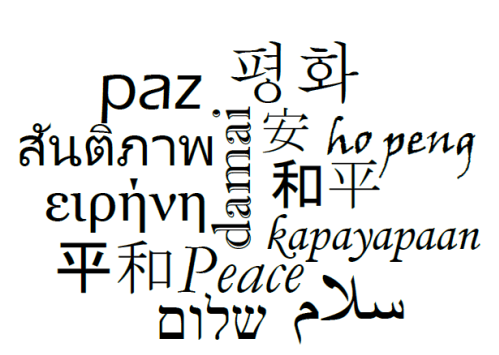 This word cloud is made up of the word “peace” in the languages of San Gabriel Presbytery—or at least the languages that influence us.  On any given Sunday, San Gabriel Presbytery speaks peace to a frightened world in English, Korean, Taiwanese, Spanish, Arabic, Chinese, Cantonese, Indonesian, Thai, occasionally Filipino and Japanese, and we might reference the biblical text in Hebrew or Greek.  We are the living example of God’s reach to all the world, and our commitment to let our neighbors know, in a language they can understand, that Jesus Christ is born, and lives, in and for all of us.  So whether you are busy and happy and warm, or lonely and grieving and cold, God’s love comes to all of us.  May we take a moment to hear the angel say “I am bringing you good news of great joy for all the people.”  And together, let us all sing:

“Glory to God in the highest heaven,
and on earth peace among those whom God favors!”