“In the last days it will be, God declares, that I will pour out my Spirit upon all flesh, and your sons and your daughters shall prophesy, and your young men shall see visions, and your old men shall dream dreams.”  Acts 2:17

This last weekend, we commemorated not one but two holidays. The third Sunday of June is Father’s Day, which happened this year on June 19. June 19th is also known as Juneteenth, and it is our newest federal holiday. On June 19, 1865, Gen. Gordon Granger announced General Order No. 3, which confirmed freedom for enslaved people in Texas. This was the last such announcement, occurring 2.5 years after Abraham Lincoln issued the Emancipation Proclamation. 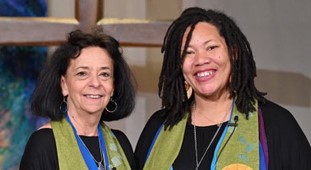 In addition to official holidays, some of us have our own personal holidays. This last weekend, General Assembly started. Steve Salyards, also known as the GA Junkie, is one of the writers covering the GA for the Presbyterian Outlook. I wouldn’t be surprised if Steve, and several others who are regulars at GA, consider the start of GA as a kind of personal holiday! This year is special, not only for the unusual hybrid format of the GA, but because our own Ruth Santana-Grace, former Executive Presbyter, was elected on Saturday as Co-Moderator of the GA, along with Shavon Starling-Louis. We will certainly look to welcome Ruth in her new capacity in the coming two years!

For myself, I can name two very specific personal holidays. One is King and Queen Sunday, my take on Martin Luther King Jr. Day. Dr. King’s birthday, January 15, 1929, is often honored on the same Sunday when churches in Hawai‘i remember with grief the illegal overthrow of the Kingdom of Hawai‘i and the forced abdication of Queen Lili‘uokalani, on January 17, 1893. Both of these leaders spent their lives seeking justice for their people, drawing on their deep Christian faith and modeling non-violent protest in their approach.

My second personal holiday just happened last Thursday, the commencement for Ted K. Tajima High School. This public charter school is not selective, and nearly all the students come from immigrant families. Most of the students are bilingual and are the first in their family to go to college. In this year’s graduating class of 112 students, 99% were admitted to 4-year colleges, including one student going to Stanford, one to Dartmouth, and several who will be attending UC schools including Berkeley, UCLA, Irvine, Riverside, and Santa Cruz. The valedictorian will be attending the University of Chicago, a recipient of QuestBridge and Gates scholarships. In his speech, he recalled being temporarily homeless when he started at Tajima High, and then his family found an apartment in Whittier, which required that he take a bus and then walk for 30 minutes to get to school near downtown LA each day. He remembered struggling with serious depression during the COVID lockdown. He honored his mother by attempting to speak in her indigenous native language from

Central America. And he closed by thanking his teachers and school counselors, including the one who encouraged him as he completed his college applications by saying, “You’re not as boring as you think you are.”

Watching these kids and seeing and hearing their families, bursting with pride, I imagined my father looking down from heaven, happy with what has been done with his legacy. When alive, he worked to inspire many students to dream beyond what society told them they deserved. In his death, this little school enables about 100 students and families to achieve their dreams every year.

We Christians often have to remind ourselves that new life comes out of death. The seed must die to bear fruit, and the Messiah must suffer on the cross before rising to new life for all of us. We are a people who see the cycle of life, and in our communal life, we weep with those who weep, and rejoice with those who rejoice. In the very full life of Rev. Mariko Yanagihara, we have occasion to do it all. Mariko has been spending years caring for her parents’ generation, and last month her father-in-law passed away. But Mariko now has another generation to care for. She is now a grandma, of two beautiful babies! Emilee Akemi Yoshida was born on April 3rd, and Kaylin Toyoko Blagaich was born on June 14th!

In our family of faith, we indeed have reason to weep, and reason to rejoice. Praise God for all these reminders that we can witness sons and daughters prophesying, young men seeing visions, and old men on earth and in heaven dreaming dreams. Thank God that whether we live or whether we die, we are the Lord’s. Together, let us continue to live into our faith, drawing strength from the love we share, and reflecting God’s kin-dom with the compassion and justice we offer. There is hope. There is life. There is Christ in our midst.