You have turned my mourning into dancing;
you have taken off my sackcloth
and clothed me with joy,
so that my soul may praise you and not be silent.
O Lord my God, I will give thanks to you forever.

This is Holy Week, and in the span of a week we move from being stuck in a state of despair to the release of salvation, the freedom of new life.

We are in a time when it seems that we are stuck in many kinds of despair. Even as we hear the first glimmers of hope in the COVID-19 pandemic, we also hear of rising caseloads again, and continuing concerns from other countries. We see as a nation the persistent burden of racism plaguing us, manifested in the rise of anti-Asian hatred as well as in the seemingly endless number of incidents of African-Americans dying by the actions of police. And we as individuals are stuck in patterns of addiction and dysfunction, our fulfillment hampered by adherence to so many myths and habits and dependencies that distract us from God.

What does it take to free us of this despair? Sometimes we hope for human effort, such as the herculean efforts of health care workers to care for the sick and scientists to develop vaccine, as well as the simple actions of wearing masks and refraining from “trading air.” Sometimes we fear that we are permanently stuck in our death-dealing ways; this week also marks the beginning of the trial of Derek Chauvin, the man whose knee stayed on George Floyd’s neck even after he became unresponsive. My own level of despair is that I cannot hope for a sense of restoration from the trial; I only hope things will not get even worse. And during Lent we are often asked to examine our own weaknesses and broken places; I committed to a simple practice of letter-writing that I failed to maintain even for the 40 days of Lent. 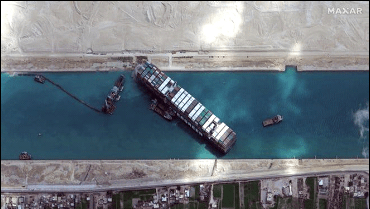 In the midst of these difficult days comes a rather spectacular metaphor for our “stuck” feelings: the Ever Given cargo ship, run aground in the Suez Canal, blocking the path of any other ship. With 18,300 containers full of goods, the 220,000-ton, 1300-foot ship was helpless to extricate itself of its predicament —and its failure blocked hundreds of other ships from their forward purpose. 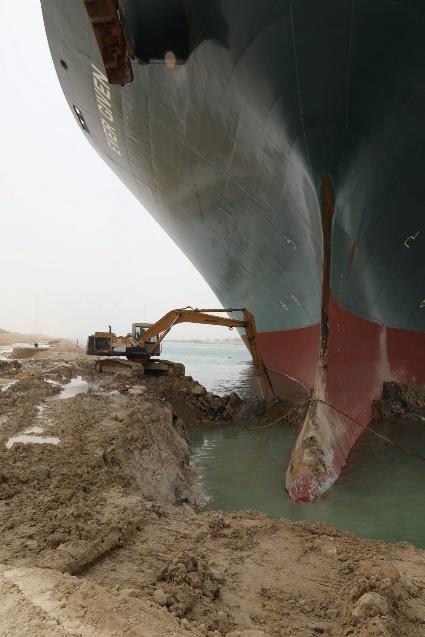 The ship stayed stuck for almost a week, and for days no one knew how to free it. One photo of a digger attempting to loosen sand and mud from under the bow seemed to reflect the enormity of the problem, and how miniscule our ability to resolve it.

Indeed, the prognosis was so uncertain that some ships chose to take the long route around the Suez Canal, which meant going all the way around the continent of Africa, adding weeks to their journey at $26,000 a day in added fuel costs.

The Japanese owners of the ship attempted to acknowledge their regret at the mishap, bowing deeply in humility. But that did not move the ship. Eventually, 11 tugboats from many different countries arrived on the scene to attempt to pull the ship back fully into the water.

They managed to get it to budge about 100 feet, but no more.

In what seems like God’s providence, an unusually high tide was due today. The army of engineers, salvage operators, and tugboat crews involved in extricating the ship coordinated their work with the high tide, and thank God this massive container ship, almost as long as the Empire State Building is tall, was freed! The relief, and the freedom which was granted the 300 blocked ships, was immediate.

As we look ahead to Easter, this strikes me as a great metaphor for our life of faith. We seem to be inextricably stuck in our own brokenness, and the enormity of our broken ambition may even impact others. Our own attempts to save ourselves are woefully insufficient, even when we work together. But if we admit our error and coordinate our collective efforts with the awesome power of God to save us, we can experience the freedom of new life.

May we open our hearts and minds to the life, death, and resurrection of Jesus, and in humility may we align ourselves to God’s saving will, that we may be freed to move and live and serve with purpose and gratitude.

And may we live to glorify God, and to enjoy God forever. Let us not rush past the events of this Holy Week, but thank God that our spiritual ancestors told us the good news of Easter. Let us give thanks that sin and death do not have the final answer. God’s power is indeed awesome, and awesome to save!

Looking ahead to resurrection hope,

← Breakout Presbytery Some Thoughts on Opening Our Buildings →