“This is my commandment, that you love one another as I have loved you. No one has greater love
than this, to lay down one’s life for one’s friends.”

I hope you have a meaningful Memorial Day today.

I don’t assume what kind of meaning you might have, though. You see, my family church celebrated Memorial Day by having a separate memorial service to remember all church members and friends who passed away in the year. It wasn’t until I went to a dominant culture church in Silicon Valley, while I was in seminary, that I was scolded for not understanding that Memorial Day was not for anyone who died, but specifically for those in the military who died while serving our country.

Nowadays, Memorial Day is just as often celebrated as the start of summer.

Though I still don’t know many people in the military, I do have an appreciation for the people who serve in this way, and the experiences of camaraderie and leadership that can be developed thanks to the military. My glimpse into military life came during my time in Hawaii, because the military has a very large presence there. From church members I saw how they offered training and education quite broadly, and effectively. 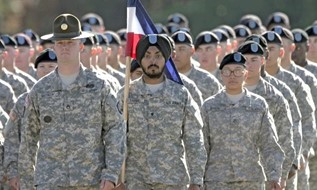 I also appreciate the military because it is one of the most diverse institutions in the United States. I’ve often thought about how the military creates an esprit de corps even among people who would have no contact in their private lives.  This picture is of Company A, 3rd Battalion, 34th Infantry Regiment, the first Army home of Simran Lamba, the first observant Sikh to serve in the US Army after a ban for over two decades. Corporal Lamba made a request for a religious accommodation – in his case, the wearing of a turban and not cutting his hair or shaving his beard, all of which are prohibited in the Army. It took almost a year to grant his request, but eventually he was received, and accepted well by his fellow soldiers.

When I was in seminary almost three decades ago, my church held a large town hall on homosexuality. I was surprised to see that some of the people who were most accepting of gays were older men.

They explained that they had friends in the military who were gay, and they came to trust them with their lives. I have a conservative chaplain friend who also became more understanding of gays when he would counsel them; he realized that they miss their families and love their partners just like anyone else.

Harlan Redmond just graduated with his MDiv from Princeton and is already planning for his new ministry as Organizing Pastor for Interwoven New Worshiping Community. His ministry in racial reconciliation is partly informed by his experience in the Army. He tells the story of his first assignment, when he was paired up with a man who was different than him in race, background, and outlook. For several weeks they were required to make each other’s beds – to their partner’s satisfaction. As Harlan tells it, this kind of humbling exercise tends to break down barriers pretty quickly.

In order to write this column, I thought I might consult Wikipedia to learn something about Memorial Day. The holiday has roots in the Civil War, and the ways Confederate women decorated the graves of their slain soldiers. However, there were a couple of early instances in Mississippi, when the women decided to decorate the graves of both Confederate and Union soldiers, and pondered the shared grief of all their families. This was praised and appreciated as a sign of reconciliation and common humanity. It was also noted that German and Irish soldiers – who were discriminated against at that time – had won respect as Americans through their service. As a Japanese-American, I know well of young Japanese-American men who signed up to the 100th Battalion or 442nd Regiment during World War II to prove their loyalty to the USA. Many marginalized people, and many seeking US citizenship, have entered the armed forces for the same reason, and many lost their lives.

I pray that we would live in a peaceful world where armed forces do not need to be so large or at risk. But there is something about joining with other people, from very different backgrounds, and asking them to work together for a cause bigger than themselves. In the secular sphere, the idea of national service, whether military or other forms of duty, might accomplish this. Jesus calls his disciples to be willing to give their lives for their friends whom he called together, even if they might have once been enemies. We Presbyterians believe in geographic presbyteries as a challenge for us to connect with whatever people happen to be in our proximity, whether or not we have worldly similarities.

There are many ways to commemorate Memorial Day. For some of us, we remember and honor loved ones we have lost in service to our country. For some, we remember loved ones, whether or not they died in battle. For this moment in time, we can’t be faulted for being more eager than usual about the prospects for a healthy summer, relatively free of pandemic-induced restrictions. But I might also suggest that we take this time to consider how we can commit (or recommit) to a cause larger than ourselves, a cause larger even than any group of humans – a cause that can only be addressed fully with the help of God, the life-giving love of Jesus Christ, and the newly-refreshed power of the Holy Spirit.

May our churches be communities of shared faith and service, drawing together people from many backgrounds to serve our God.

In Peace and Service

← Power The Opposite of Reparations →