You are the descendants of the prophets and of the covenant that God gave to your ancestors, saying to Abraham, “And in your descendants all the families of the earth shall be blessed.”

Last week I mentioned working on a talk I am preparing for, a recounting from my perspective of the experiences of what we used to call the JPC, the Japanese Presbyterian Conference. While I am still quite nervous and humbled by the invitation to speak to the NCKPC, the National Caucus of Korean Presbyterian Churches, it has been a blessing to me personally to have occasion to put together several of the strands of my sense of self and faith.

Somewhere in the work I found a couple of websites on redlining in the greater Los Angeles area. In 1939, the Home Owners Loan Corporation (HOLC), under the Federal Housing Administration, was established to increase homeownership for working-class Americans under President Franklin Roosevelt’s New Deal. Part of this work was to assign grades to the various neighborhoods as a way of assessing property values. It is ironic that this effort helped to raise the lifestyle of working-class Americans coming out of the Depression, yet also reinforced one of the most damaging aspects of structural racism that impacts the financial security of people of color even today.

But if we know our history, it helps us avoid repeating the mistakes of the past. In the case of Japanese- Americans, the website https://www.laalmanac.com/history/hi727.php shows how we were seen back in the day, when my parents were just finishing high school. This website has a summary table of some local neighborhoods, of which I am listing just a few. The table below uses the exact terms from the HOLC descriptions; in the grading, “A” is the most desired of neighborhoods; “D” is “hazardous.” 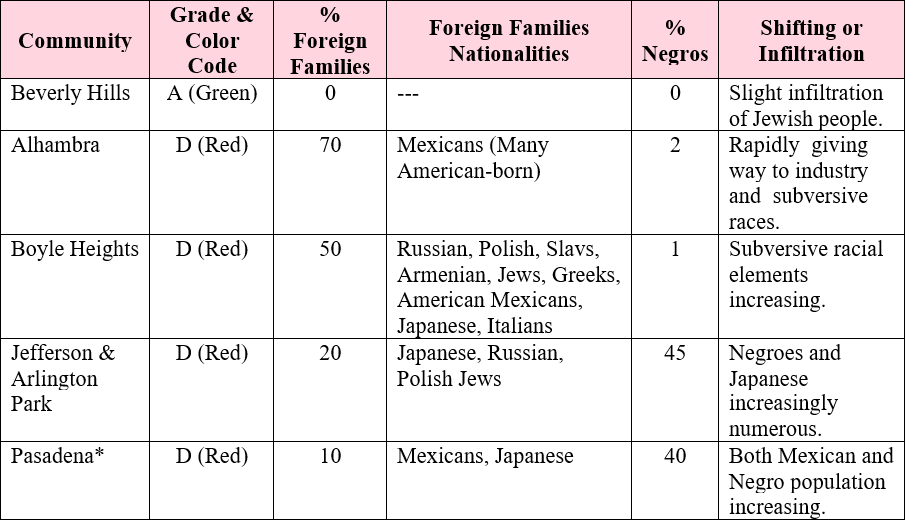 * One of several neighborhoods in that community

This table reflects the diversity that Los Angeles has always known, and the nature of racism in this diversity. For instance, I always loved Boyle Heights for the great cultural mix that has been there for so long. It is the original home for the Jewish community, and the Japanese community, in Los Angeles, and Americans of Mexican descent continue to live there. This report shows how people who would now be called “White” were listed as undesirable foreigners. African-Americans are measured in their own column in the table, and the harshest exclusionary practices were used against them.

The second website, https://dsl.richmond.edu/panorama/redlining/#loc=14/34.168/-118.173&city=los- angeles-ca&area=D6&adview=full, includes an interactive map so you can look up your own house and see how your neighborhood was valued in 1939.

You probably know that segregation was enforced through racially restricted “covenants,” by which White homeowners were supposed to fulfill a promise not to sell their home to anyone who was not Caucasian. As a Christian, I was always confused by the use of this term, because it is such a fundamental aspect of our relationship with God. Of course, the term simply means “contract” or “agreement,” so those agreements can be used for good, or ill.

But undoubtedly, God can make good out of ill. The neighborhoods of African-Americans and immigrants were considered undesirable by some, but they offered opportunity for diverse peoples to come to know, care for, and learn from each other. For instance, a favorite story from First Presbyterian Church, Altadena, is the friendship between Jackie Robinson and his next door neighbor and UCLA teammate, Shig Takayama. Their families were so close that when the Takayamas were sent to the camps, the Robinsons watched over their home for them. And right before the Japanese were expelled, Congregationalist pastor, Royden Susu-Mago, shared in his sermon:

Having learned the result of intolerance, let us be tolerant of others……. I like to think of the fine attitude of the Negroes towards us. Consider how the Negroes have been persecuted as an inferior race because black happens to be a hated color……………….. You would think the Negroes would jump at the opportunity of crying “Japs,” and joining the nation in oppressing us, but they have not done it. They understand how it hurts to be segregated and denied civil rights. They have learned tolerance, remembering how Jesus said: “Why beholdest thou the mote that is in thy brother’s eye, but perceiveth not the beam that is in thine own eye?” (Matthew 7:3; Luke 6:41)

Let us gain strength, and courage, and love by the covenant we have in Jesus Christ. Let us form covenants of mutual respect, and care, and justice with all of God’s people, that we may be a blessing to all the families of earth. Let us tell our stories, and hear the stories of each other, and together tell the story of the healing action of the Holy Spirit in our lives and our churches.

In the Presbyterian tradition, we believe in geographic presbyteries because we believe God put us in this community together for a reason. Let us seek God’s will together, and do it.

Gathered as one body,