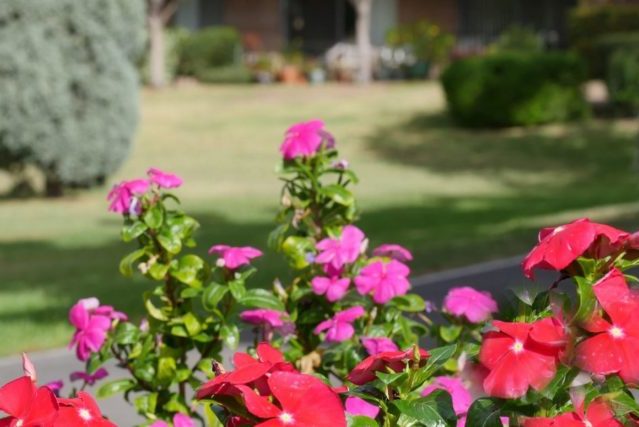 Yesterday, Mideast Evangelical Church worshiped for the first time in their new home at 9723 Garibaldi Avenue in Temple City. They were welcomed by Grace Taiwanese Presbyterian Church, who have been worshiping at this location for about 20 years. Each first Sunday of the month, MEC has an intergenerational bilingual communion service, with simultaneous translation of the sermon. Grace worships (in Taiwanese) at 10:30 a.m., MEC (in Arabic) at 1:30 p.m. if you’d like to worship with them. 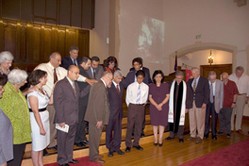 Members of the Mideast Evangelical Church pray for Maher Makar.

Thanks to the excellent translation, I was able to appreciate Rev. Maher Makar’s sermon. As a Bible scholar, he provides Bible study as well as modern application.

As he considered Acts 7, when Stephen preached about Moses, Maher noted how the Bible uses “40 years” to represent a completion of a phase in one’s life. So Moses’ life was divided into three 40-year blocks. The first 40 years, Moses was raised and taught in the house of the Pharaoh. The second 40 years, after killing an Egyptian, he lived in Midian as a shepherd. The third and last 40 years was, of course, the Exodus.

Maher’s message was that God chooses whom God chooses and when God chooses, and what we do in service to God’s mission is not based on our skill and strength, but on God. So it’s never too late to serve God, because God will make us able.

For several years I’ve been thinking about how things will change as the Baby Boomers move into retirement age. The Boomers (born 1946-1964) have been so dominant that they have recreated each phase of life in their own image. As one person said, “when the Boomers started to have children, it’s as if they invented parenthood.” Many of the recent changes in the church (for instance, praise music, and also the marginalization of the church) came from the Boomers’ critical view of the traditional church. 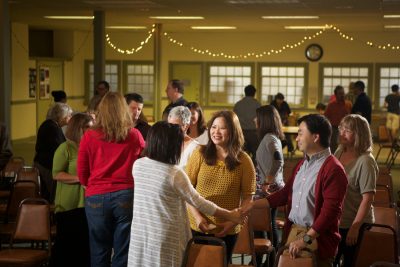 We are now in a post-Christendom world, where about half of US Christians attend church. But as the Boomers age, some are becoming nostalgic for their roots-which include the church. Some are seeking new community and activities to replace their job and child-raising responsibilities. Some are considering the ultimate questions of life as they age. And some, who do not find their way back to church, are often met with grace and compassion by chaplains while in the hospital or hospice. So there are new opportunities to proclaim the gospel to those who have never really experienced a life of faith, or walked away from it.

I have noticed a new awareness of the times when God calls individuals in their advanced age. The first time I heard this was in a Pentecost sermon given by Mark Lau-Branson. He noted the Jewish tradition of wanting to die in Jerusalem, even for those who lived all over the world. This resulted in Jerusalem being a kind of international retirement community, so when the Holy Spirit came down on Jesus’ disciples and attracted the attention of the people, many of these early Christian converts were awaiting death. As noted by Maher Makar, Moses was 80 when God called him to confront Pharaoh. And we all know that Abram and Sarai embarked on their journey at the ages of 75 and 65, and did not bear Isaac until 25 years later.

As Maher said in his sermon, when God called Moses to confront Pharaoh, Moses probably thought, “Why come to me now? Why didn’t YHWH come to me when I was 40, when I was strong and able?” But as God made so clear when speaking through the burning bush, God does not call us when we are ready to do great things with our own abilities, but God calls those whose abilities are doubtful, so that we must answer with faith, and our actions reflect God’s glory, not our own. It is not up to us to decide when it’s convenient to serve the Lord, it’s up to the Lord to know when the time is right.

Recently we had a meeting of the advisory team for Rev. Lauren Evans, our new Chaplain for Retired Church Workers. I always enjoy talking with Lauren about her ministry, because as Rev. Doug Edwards points out, we have the opportunity to look anew at ministry with retirees. Due to our longer lifespans (I believe Board of Pensions said that our retirees live on average into their 90s), we can expect to live 20+ years after retirement. So retirement is not just an ending, but a whole new chapter for life and ministry. 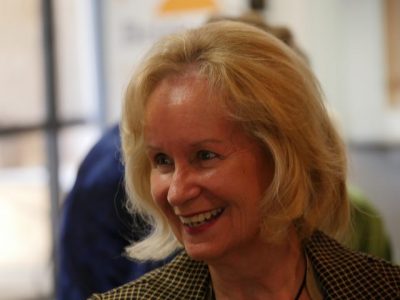 Doug mentioned that the most important factors in our well-being in retirement are community, purpose, and health. As church families, and as the Presbytery family, we have the opportunity to welcome retirees into community. As Presbyterians, we know God calls us for God’s purpose-and we understand that the nature of that call can change over time. While we often think we can’t control health concerns, we do know that community and purpose do have positive impact on one’s health. Conversely, we are challenged to be a welcoming community and to support one’s evolving call, even as health considerations may affect the ease with which we can put someone into areas of responsibility.

In the coming years, I believe there are growing opportunities for outreach with older adults. And as we open up to God’s call in unexpected times, may we be reminded that God calls all of us, not when we are ready, but when God ordains it.   And as God calls us forward, may we respond with faith, because as God told the 90-year-old Sarah, “Is anything too wonderful for the Lord?”

Trusting in our wondrous God,

← Hands Held High On the Move →