Do not put your trust in princes,
in mortals, in whom there is no help.
When their breath departs, they return to the earth; on that very day their plans perish.

Happy are those whose help is the God of Jacob, whose hope is in the Lord their God,
who made heaven and earth,
the sea, and all that is in them; who keeps faith forever;
who executes justice for the oppressed; who gives food to the hungry.

The Lord sets the prisoners free;
the Lord opens the eyes of the blind.
The Lord lifts up those who are bowed down; the Lord loves the righteous.
The Lord watches over the strangers;
and upholds the orphan and the widow,
but the way of the wicked God brings to ruin.

The Lord will reign forever,
your God, O Zion, for all generations.
Praise the Lord!

The events of last week put to bed any fantasies that 2021 would be more peaceful than 2020. Wednesday certainly was a day for the history books, and all sorts of folk have shared all sorts of responses. Commentators in the United States and around the world spoke of the shock that such a beacon of democracy as the USA would experience such an insurrection. Quite a few of my presbytery executive colleagues rushed to send out a letter to their presbyteries to calm their nerves.

I’m not sure whose nerves they were trying to calm, but I didn’t see a need to send such a letter. Sadly, my family history has taught me that this kind of rage and hatred is not unknown in the US, and I know that I am not the only one. When I went to seminary and started visiting a lot of churches, I noticed how many have the US flag in their sanctuaries. To me, it reflected a conflation of civil and Christian religion. As I thought about it, I could only conclude that my family church, being Japanese-American, never confused the United States with the kingdom of God—but others apparently have.

It is in times of greatest distress that we Christians have the opportunity to be a beacon of hope, that joyous countercultural community, a loud witness to a ruler so much greater than any mortal government, a nation that transcends specious racial or territorial bounds, a love more healing and liberating than hate. I am quite aware that the attack on the Capitol occurred on the day of Epiphany.

The word “epiphany” comes from the Greek word for “reveal.” We can disagree what this event reveals. But regardless, we can choose to reveal something of who we are, as followers of Christ.

As it happens, I just got a notice from Facebook (which I hate, so I never read) that Bruce Reyes-Chow posted one of his very witty status updates. It was funny enough to prompt me to take a look at his Facebook page. There I learned that he has a new book coming out in March, titled “In Defense of Kindness: Why It Matters, How It Changes Our Lives, and How It Can Save the World.” Bruce is a seminary classmate of mine, but you may know of him for being a former moderator of the PC(USA), an important prophetic voice for justice and new worshiping communities and technologies in the church, and now he is pastor of First Presbyterian Church in Palo Alto. Bruce is funny, faithful, insightful, and I guess challenging, which has led him to attract some criticism. Yet he is lifting up kindness as the choice we can make to change the world. He is also, by the way, the plenary speaker for our week of WinterFest, February 1-6; Bruce will speak on February 6 but I definitely invite you to register for multiple workshops as well.

On Bruce’s Facebook page was another posting, from Michael Adee, a committed Presbyterian who has faced more than his share of trials as a leader in the PC(USA)’s checkered history in LGBTQ inclusion. Michael chose to respond to the crisis in our capitol by sharing one of those “why I’m proud to be a Presbyterian” articles. Michael wrote:

“Look for the helpers. You will always find people who are helping,” Mr. Rogers often said to children of his mother’s counsel to him during frightening moments on the news. 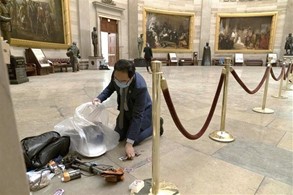 One of those helpers was Rep. Andy Kim (D-NJ) the son of Korean immigrant parents and the first Asian- American elected to Congress from New Jersey. Late January 6, Rep. Kim was clearing up the debris left by the insurrectionist white mob during their attack on the Capitol. “When you see something you love that’s broken you want to fix it. I love the Capitol. It really broke my heart and I just felt compelled to do something. What else could I do?” said Rep. Kim. Fred Rogers was a Presbyterian minister, Rep. Kim and his family are Presbyterian. Thank God for the helpers.

You can see the full article by clicking here.

I’ve shared before one of my favorite statements from John Calvin, the words that begin his Institutes: “Our wisdom, in so far as it ought to be deemed true and solid Wisdom, consists almost entirely of two parts: the knowledge of God and of ourselves.” We must not forget or deny our brokenness, or the immense power of our eternal God to make right whatever small terrors we can create. But we are also amazed to consider that this great God would yet create us, love us, and invite us to share in fixing this old world that we love. We just need to say “yes.”

A friend of mine, Katie Morrison, faced resistance from this presbytery back when she was in seminary. Like me, she has named a blessing of her life having grown up in Pasadena, where people of many races not only live together, but are respected leaders in the community. Her message in the face of resistance was learned from the well-worn faith of the Black community. From “Hallelujah, anyhow,” she said, “Alleluia, Anyway!” We do face trials of all kinds, but we can use whatever we face as an opportunity to share our faith of hope and kindness with a hurting world. May we find ways to do so now, and always.

← Shining in the Dark What Church is For →